Home » The Lounge » 11 Wonders of the Waterpark World 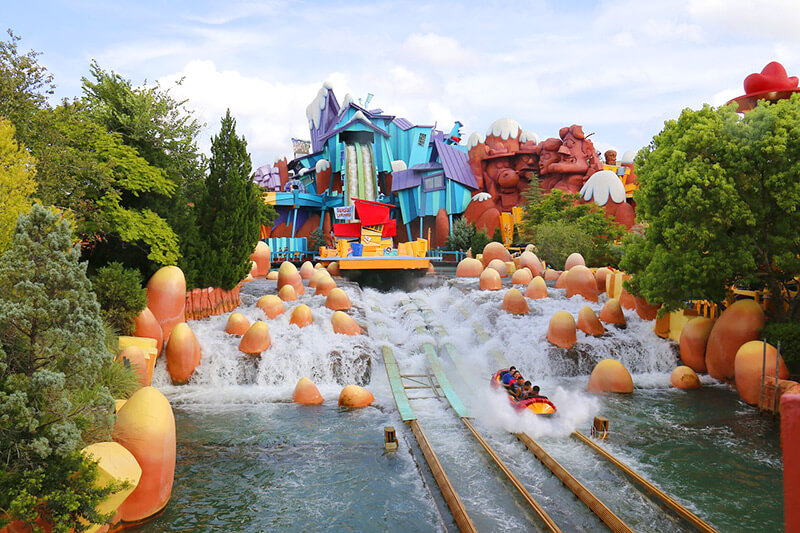 11 Wonders of the Waterpark World

If like us, you found the concept of Kevin Reynolds’ Waterworld ocean sci-fi a great deal more exciting than the actual movie itself, the search for a place one could indeed refer to as a true “waterworld” can often prove to be as extensive and vast as the holes in the movie’s plot.

But fear not, for we’ve taken on the arduous task of finding some of the world’s best spots to make a splash… 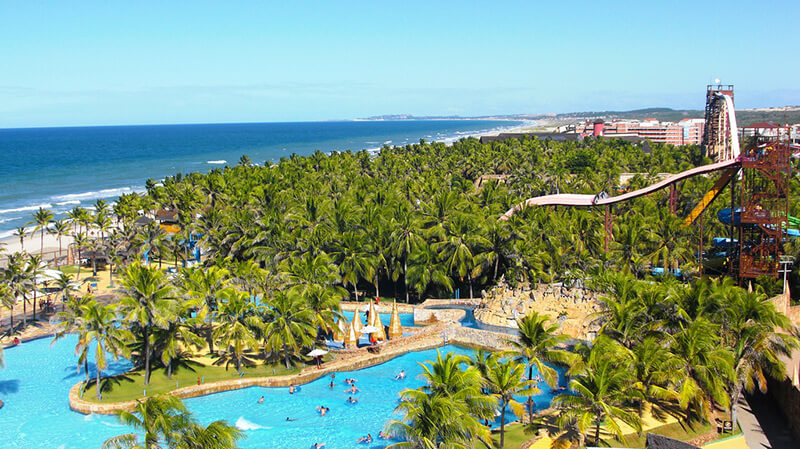 Meet the world’s tallest water slide, Insano, which towers over the surrounding landscape at 41 metres high. The name can be translated as either ‘insane’ or ‘unhealthy’ – you decide – and the slide launches you at an astonishing 65 miles an hour on a ride that takes only four seconds to complete. Boasting a golden Brazilian beach and family-friendly resort, Beach Park caters for those wanting relaxation and those wanting an adrenaline high!

One of the most breath-taking waterparks in the world, Cacheuta is built out of natural hot springs in the Andes Mountains. With man-made pools and streams cut into local stone, the park is the perfect retreat in a natural beauty spot. With a back-to-basics, caveman vibe and the ultimate relaxation haven, you’ll no doubt relish the chance to float your way down a natural hot river under the Argentinian sun.

Located on the Mexican Caribbean seashore, Xcaret perfectly blends history, culture and adventure. Relax on the beach or in natural pools, explore the coral reef aquarium and take a unique opportunity to swim with dolphins. With daily musical shows charting the history of Mexico, as well as the chance to immerse yourself in cultural costumes, folklore and dancing, Xcaret entertains, educates and inspires. 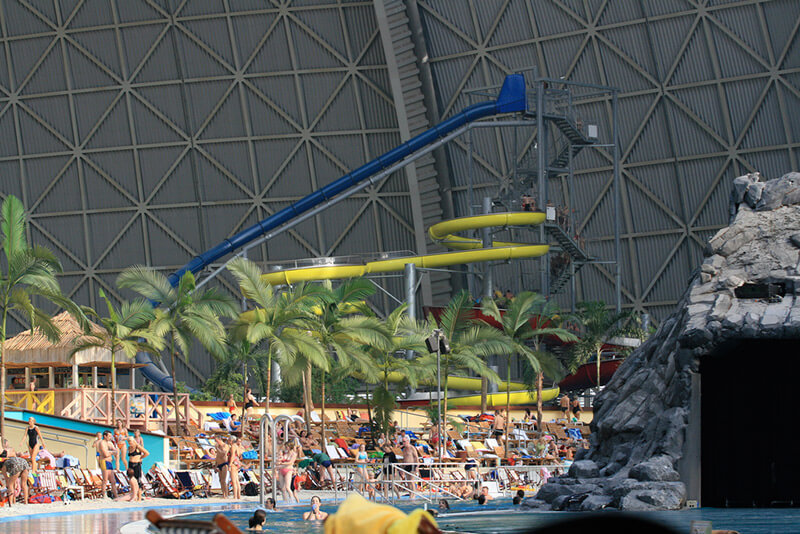 Tropical Islands is built inside an airship hangar – the largest freestanding building in the world, and hence, it is the world’s largest indoor waterpark. With four themed areas including The Tropical Sea with a sandy beach and enormous pool and The Bali Lagoon, with fountains, a canal and water slides, you can experience a tropical paradise in a European location. With balloon rides, circus-style aerial acrobatics, a tropical rainforest and more – this is a truly one-of-a-kind experience. And it’s only an hour and a half south of Berlin.

The Area 47 Surfslide Hydrospeed slide is a ride for the daring, propelling you at a tantalising pace before ejecting you across the surface of a natural lake. The Surfslide is just one of five rip-roaring slides and with a powerful water catapult, a 30-foot-high diving platform, rock climbing walls and zip lines, Area 47 is a park for daredevils and eccentrics alike.

A landscaped park that celebrates Vietnam’s rich history and legends, Suoi Tien Park boasts an aquarium, jungle and 1,500 crocodiles in a setting surrounded by giant statues, including an enormous 300-ton dragon head. With water rides for adults and children, a journey into the underworld and meetings with monsters and mythical creatures, this is a park with stunning scenery and unusual attractions that perplex, amuse, and entertain.

Looking like a sprawling mass of snaking tubes, Yas Waterworld celebrates the region’s pearl diving heritage in true Abu Dhabi style. With four thrill levels and 43 rides, including two adventurous water coasters, a looping slide, and a water-dropping suspended roller coaster, Yas Waterworld gives you the chance to play as well as learn in a beautiful beachfront location.

A waterpark with a twist, Aquatica offers visitors a truly immersive experience as you get to zip through transparent water slides in the watery world of marine life. The star of the show is Dolphin Plunge, which sends you racing through an underwater world filled with beautiful black and white Commerson’s dolphins. Unique to Aquatica are giant, side-by-side wave pools where you can choose to relax or surf.

Aquaventure takes the Aquatica theme to the next level with Shark Attack! – winding water tubes that shoot you through a shark-filled lagoon. The centrepiece is Ziggurat, a Mayan-inspired tower where The Leap of Faith awaits – a plunging nine-storey slide that takes you back into the infested waters. You can also get up close and personal with the marine life in Shark Safari as you take a walk through the living room of the razor-toothed beasts. 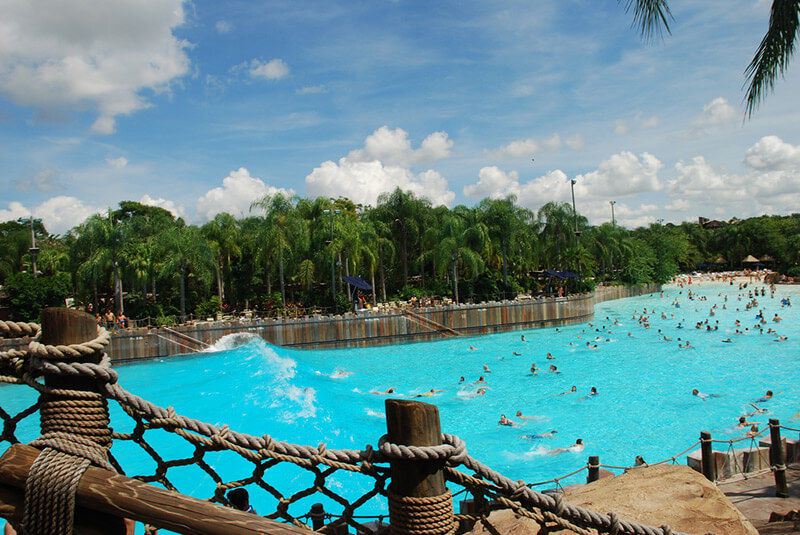 Boasting two immense waterparks, Walt Disney World is the place to go for the ultimate in all round water fun. Typhoon Lagoon is the most visited waterpark in the world and pairs almost ridiculously frightening thrill rides with relaxing chill rides. And don’t miss the man-made Shark Reef where you can snorkel with sharks, rays and tropical fish. Not to be outdone by its popular counterpart, the faux-freezing Blizzard Beach is a waterpark on ice; it replicates a snow covered ski resort with ski-slope waterslides and fast and furious toboggan racing! 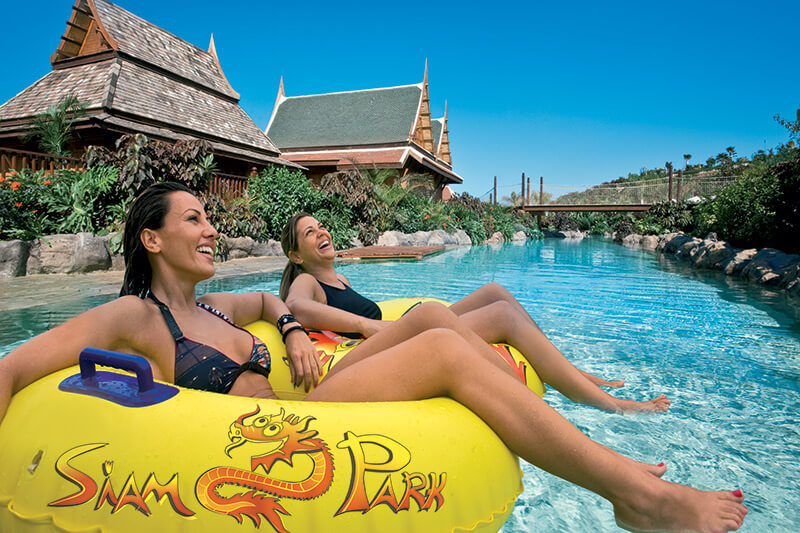 Last but by no means least is TripAdvisor’s #1 water park in the world as of 2017. This ‘Thai style’ water kingdom has everything necessary to turn your day into an aquatic adventure. Tailored for families and adrenaline junkies alike, Siam Park has it all. Careen down high speed chutes such as The Mekong Rapids and Kinnaree or experience a whole new level of water ride with the zero-gravity Dragon attraction that plummets you down a vertical funnel. Then there’s the pulsating Volcano ride that plunges you into a watery abyss before being greeted by an sensational laser display. Once you’ve got your breath back there’s ample chance to relax in Siam Park’s beach cabanas or soak up your exotic surroundings as you float down the gentle Mai Thai River.