Home » The Lounge » Insane theories about Game of Thrones 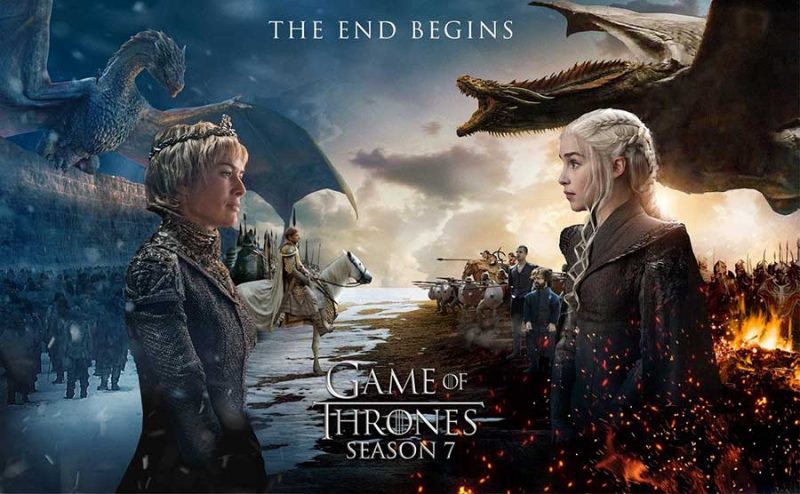 Insane theories about Game of Thrones

So we’ve all been there just after a Game of Thrones episode, unsure of how to react, pretty sure we didn’t breathe the entire episode. Someone (definitely) died, and now you’re unsure what’s going to happen because, well, it’s Game of Thrones. But just to get your brain ticking a little more, here are two Game of Thrones theories that are sure to blow your mind.

The Night King is more than he appears

From the moment Game of Thrones began we were told about the Wight Walkers and the threat they could have on the realm. And in ‘Beyond the Wall’ we realised how significant they really are.

One thing that is clearly evident is that the Night King was VERY prepared for the battle against Jon Snow and his crew. Although Jon and the others had planned a secret attack, the Wight’s seemed ready.

Let’s look back at the ‘Eastwatch’ episode and the scene where Bran wargs into the ravens to discover the Night King and the Wight’s. If we look at the location the Wight’s are standing exactly where Jon Snow and his men were trapped for several hours surrounded by the dead. Coincidence? I think not. It was a trap set by the Night King that Jon Snow and his men walked right into. A lot of people believe the Night King is a greenseer similar to the Three-Eyed Raven, which means he can also see into the future. If this is true, then the entire plan revolved around the Night King waiting for Daenerys and her dragons to arrive so he could take one for himself.

So why did the Wight’s hold back from attacking Jon Snow and the others? Because of the cracked ice around them? That seems unlikely as we have seen them jump off the edge of a cliff in ‘Hardhome’ to kill. Water would not stop them from murdering the men if that’s what they were told to do. Surrounded by thousands of Wight’s Jon Snow and his men could have easily been killed, but they weren’t. The Night King was waiting for Daenerys to arrive with her dragons and for them to be distracted with the rescue operation before striking at them. Jon was the bait and Viserion was the goal.

To further prove this point look at this photo of the wight Jon and his men captured and held beside them on the rock, the Night King warged into the wight to spy on everything Jon Snow and the others were saying. 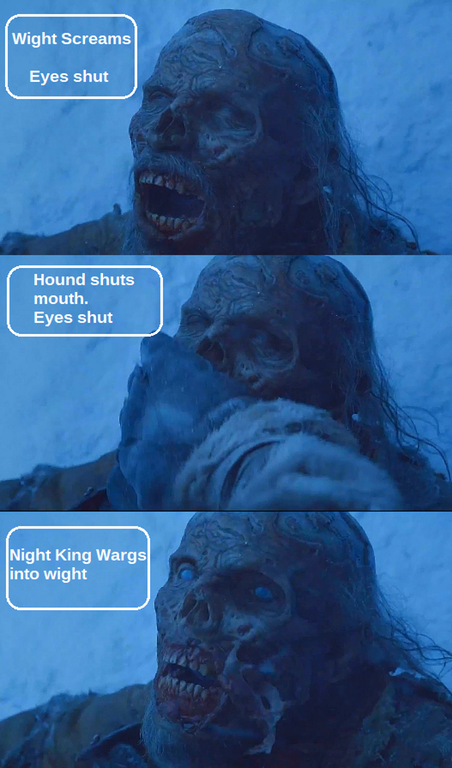 Also did anyone else notice that the white walkers were equipped with giant chains and ice javelins to attack the dragons? If the Night King had planned everything then he came prepared for the battle. So does that mean as a greenseer he can interact with Bran during his visions? (We’ve seen The Blood Raven who was the previous Three-Eyed Raven interact with Bran). If so, then the Night King knows how to spot Bran during his visions and knows exactly what everyone is up to as well as where they are, which is exactly how he found Bran in the cave the night Hodor died.

If all this is true, and the Night King can in fact see into the future, then he is a formidable threat as he now has a dragon in his possession too. We don’t know what will happen next, but we do know that winter is definitely here.

Bran is the Night King

This theory is one of the most popular out there and the scariest part is it actually makes sense. How is this possible? A series of timeloops. First you need to understand that Bran not only has the ability to warg into humans; he also has greensight, visions and prophetic dreams. With all these skills he has the power to change the past. He proves this when he wargs into Wylis/Hodor, and when he causes Ned Stark to react to his voice at the Tower of Joy. So it may be possible that Bran saw the destruction after the Great War and tried to go back in time and stop it all from happening. But with each attempt he failed, which eventually lead to him getting stuck inside the Night King. So where did he go wrong?

We are aware that the Mad King Aerys went insane due to the ‘voices’ in his head, but what if it had been Bran the whole time telling him to burn all the white walkers? Bran may have gone back in time and seen the Wight’s rising during the time of Aerys II and tried to persuade the king to stop them before they could get any bigger. Instead, his plan backfired and the king went mad and burnt his own people instead.

The children of the forest

With his attempts at stopping the wight walkers failing, Bran went back in time to before they even existed and took over the body of the first man the Children of the Forest turned into a wight. He may have tried to stop the children or the war with men in the hopes that the Wight walker threat would be eradicated. But as the initial Three-Eyed Raven warned, you cannot remain in the past or another’s body for too long otherwise you will get stuck there. And that is how Bran got trapped in the first Wight Walker who also has the power to raise the dead. Bran has to live in his body for thousands of years which is why the Night King can see him during his vision and mark him.

Remember when the Three-Eyed Raven talks about how Bran “will fly”? Could this be the Night King who will ride his newly caught dragon?

Another piece of evidence for this theory is that when Bran watched the vision of the first wight creation, the man who was transformed gripped the tree the exact same way Bran gripped the roots of the ground while watching, as though he was reliving that moment again.

So these timeloops are the reason why everything has happened. People often question why the Night King lets Jon go home at ‘Hardhome’, this may be because deep down Bran still lives within the Night King and recognised someone from his family. Furthermore, in ‘Beyond the Wall’ the Night King does not kill Jon Snow even though he was an incredibly easy target. This may be as he hopes Jon will eventually kill him and end his nightmare. George R.R Martin did say the ending would be bittersweet? Is that because he will have to sacrifice himself at the hands of his brother to save everyone?

Sania is a copywriter for The Leisure Lounge. Constantly baking, writing stories, eating out, and watching movies.